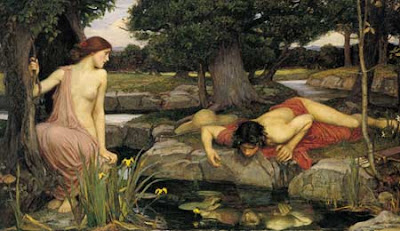 Forest nymph Echo was condemned to repeat the last words spoken to her by Hera the wife of Zeus whom she conspired against. Later in the forest she came across and fell in love with the beautiful youth Narcissus. She ran to him but he rejected her approach outright however not being able to take no for an answer she followed him as he journeyed. Eventually he knelt at a pool to drink upon seeing his own reflection in the still water he was immediately smitten ‘I love you ‘ he said to himself ‘love you’ Echo whispered in reply. His new found love was his obsession and he would not leave the pool to eat, nor disturb his image to drink and so he died of thirst and hunger and unrequited self-love. Echo died of a broken heart as she waited in vain for Narcissus to notice her. Neither left behind bones to bury but her voice reverberates gently around the mountains and caves and tiny yellow flowers grew where he fell.
Painting by John William Waterhouse (1849 -1917) ‘Echo and Narcissus’ 1903
Posted by Iris at 22:49