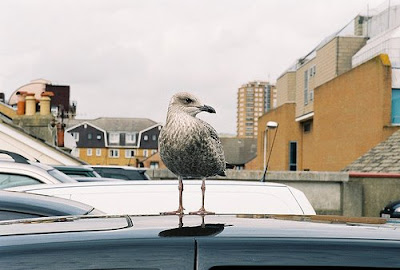 The other day walking my Chihuahua home from her after lunch stroll around the St Martins Hotel, we spotted a large speckled bird walking along the pavement near our home. I picked up my dog since she can be somewhat xenophobic and followed the bird as he marched confidently down the alley past the book shops, print shops and antiques. Despite his cheerful demeanour I was concerned that a feathery young man like him could very soon become the victim of misfortune in ‘the heart of London’s theatre district’. I over took him and called out to a friend from Brett’s bookshop on the corner. Richard a self confessed bird fancier sprung out of the shop and observed the bird who was now surrounded by Japanese tourists blinding him with their camera flashes. “Its a baby Seagull” he observed. The bird displeased with his sudden celebrity took off hastily towards Charing Cross Road. “We had better save him” I said fixing Richard with a hard stare. Richard stubbed out his roll up and took off after the Seagull who had dashed around the corner pursued by the happy snappers. I heard an angry squawk and Richard reappeared with the large bird under his arm. He was put in a box and a few hours later collected by the RSPCA and taken to a bird sanctuary in North London where he can complete his adolescence in safety. We called him Cecil naturally; so far he has neither written nor called.
Posted by Iris at 09:02

Labels: all creatures great and small