Woman of the hour 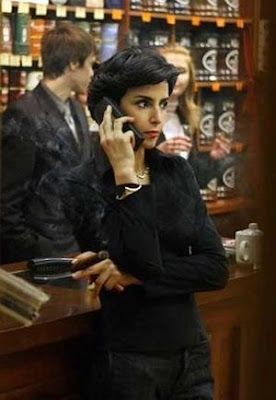 Loving all the scandal about French Justice Minister Rachida Dati’s decision to return to work a few days after having given birth to her daughter. I think that it’s amazing that she had her first child at 43 – women who have it their own way are an inspiration. I love her looks as well – she is reminds me of Beatrice Dalle , the heroine of my teen angst which is ongoing. I am guilty of a double standard I must confess – while I feel disgusted at the site of the pathetic ever pregnant Victoria Beckham squishing her still bloodied lipoed body into tiny jeans 10 minutes after giving birth somehow I don’t mind that Rachida has managed to do the same thing. The difference is I think that Rachida is a smart educated woman who serves a purpose and VB is a pointless anorexic with more money than sense. Also I like what appears to be an unsentimental approach to motherhood – not every woman who gives birth has to become a complete bore though many do. I had lunch in Westbourne Grove today and this vile woman was breast feeding her baby at the table next to us. Hideous – that’s one woman’s right they can take back. She was dining with 3 men as well - the epidural had obviously permanently numbed her dignity as well as she concern for aesthetics and other people. My friend took one look and commented in horror ‘ Rachida Dati would never do that!’
Posted by Iris at 20:58

But I'm afraid looks don't make a good justice minister. You can't like Dati and write: "I think prisons are a social shame – and that we as a civilised country ought to be able to embrace and rehabilitate people who fall into difficulty within the larger community and that only very dangerous psychopathic people should be locked up." After all, Dati stood for a tougher stance on juvenile offenders and minimum MANDATORY sentences for repeat offenders. (You shan't steal a scooter twice.) Yeah! Let's fill up prisons!