I go to sleep and imagine that you're here with me 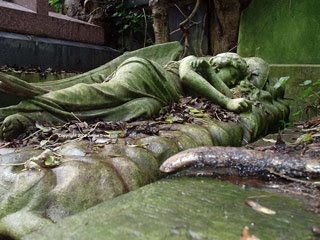 I went to Highgate cemetery this Sunday and I think it might possibly be the most beautiful place in London. You have to take the tour if you want to see the divine West Cemetery but its very interesting and worthwhile to do so. It really is the most magical, exquisite, fairy tale, Gothic graveyard ever. Sadly the catacombs are far less romantic than those at Kensal Green as they are made up of just one recessed tunnel that runs underneath the cemetery wall, they have a slightly abandoned wine cellar feel to them and they are actually on ground level which I didn't like.   Now I am conflicted (in death as in life) as I would love to be interred in a catacomb at Kensal Green but if I were to be buried in the ground I would want to be buried at Highgate West.


Later we went over to the more modern Eastern burial ground to pay our respects to Malcolm McClaren. Most of the visitors were busy having their picture taken by the huge Karl Marx statue but we don’t agree with communism, ( Richard works in fashion and I don’t like being told what to do) so we didn’t bother with that. We walked past Jeremy Beadle (who knew??) and then Patrick Caulfield’s witty headstone that just says DEAD. Richard asked the attendant how much it would cost us to be buried there. He looked a bit suspicious at first but after pause said ‘four figures’ , then ‘ and we don’t take advance bookings you have to be dead or at least terminal.....’
Posted by Iris at 17:27