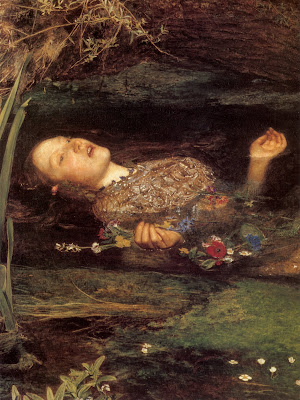 All chances pass me like dream,
I neither sing nor pray;
and thou art like the poisonous tree
that stole my life away.

I saw Lizzie’s grave at Highgate Cemetery at the weekend. She is often referred to as the first supermodel as she was the muse and model to the Pre-Raphaelite Brotherhood painters and later the wife of painter and poet Dante Rossetti. Dante apparently drove her half crazy with his philandering ways and having been addicted to Laudanum for a number of years she finally took an overdose and died 1862. Dante was so full of grief (GUILT) that he buried a new manuscript of his poetry in the coffin of his lost love. Unfortunately they didn’t have photocopiers in the 1860’s and 6 years later when he hit a creative dry spell he appealed to the home office for permission to dig them back up. One moon lit night (like tonight) his lawyer and a team of workmen went to Highgate and by the light of a fire they exhumed Elizabeth and retrieved the book of poems while Dante stayed on terra firma a few miles south of the scene. His officer told him that when they opened the coffin they saw that Lizzie was as beautiful in death as in life and that her famous auburn hair had grown to fill the coffin.
Posted by Iris at 23:58