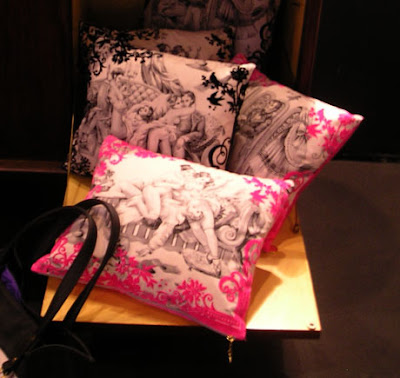 Toile de Jouy is a wonderfully intricate fabric print often consisting of pink rural themed illustrations on a base of white or creamy fabric. Originally created and used to make casual dresses for Marie Antoinette to kick about in at Le Petit Trianon a chateau in the grounds of the Palace Versailles. LPT was originally commissioned by Louis XV for his mistress Madame de Pompadour. It was in fact Madame du Barry a subsequent mistress of the amorous sun king who lived there in the end. When the King died and she was sent off to repent (for his sins!) at the local convent. Louis XVI became King of France and gave it to his wife Marie Antoinette so she would have a little holiday home to hang out in away from the formality of Versailles. Two more facts, I sleep on the toile de jouy bed linen from Liberty and Peter Saville and Julie Verhoeven created a beautiful kinky sex version of the traditional French print entitled Forget-me-not
Posted by Iris at 19:43

okay so i have to ask, does that mean cause the toile de jouy was the fabric of choice for these knock about frock that it is kind of like an antique predecessor to juicy couture?