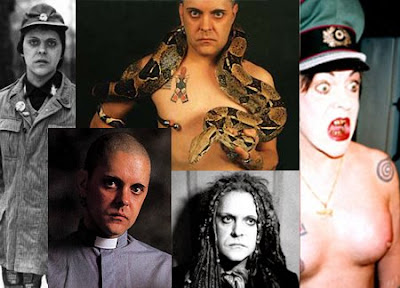 On Tuesday evening I went with my friend Pippa to see the new Joy Division documentary directed by Grant Lee. Although I enjoyed the film I have to say that I preferred Control – last years Joy Division movie way more, it was just so much more creative and invocative of the depressing North West. The documentary was made up of archive footage of Joy Division intercut with interviews with the members of the band and their associates who rather than kill themselves tragically young had opted to grow old, fat and boring. What stood out for me though were sections of interviews with Genesis Breyer P-orridge who had been a friend of lead singer Ian Curtis. He was just mesmerizing and so intelligent and coherent – most people would seem so cut in next to Pete Hook but Genesis is such an interesting artist. I found a series of interviews with him on the internet so click on the link (I can’t believe I have made hyper links !!) and check him out. I like a man who goes just that little bit further.
Posted by Iris at 22:07